All Saints Anglican Church is located on New Ross Road in Leminster. The church was built in 1871 and is remembered as a focal point of the community. The building is a simple wood frame construction with wood shingles. It has Gothic Revival style architecture with slim windows. The bell tower is not symmetrical, which is dissimilar to other churches of the same period in Hants County. It also has an open belfry which is more common among Lunenburg County Churches. The All Saints Anglican Church is valued for its role as a church and focal point in the community of Leminster as well as a good representation of Gothic Revival architecture.

Dimock House was constructed between 1800-1835 and is located on Highway 236 in Scotch Village. The Dimock family were among the first settlers from New England, originally arriving in 1759. The Dimock House has Cape Cod style architecture, with some Greek Revival exterior details. It is a simple one and one-half (1 ½) storey wood construction with wood shingles. It has a central front door with side lights and two (2) Italianate style bay windows on the front elevation. The land is also included in the Municipal designation.

Greenwood was built in 1830 and is located on Falmouth Dyke Road. It is built on one of the original Falmouth Township land grants for Planter colonists who settled on lands vacated by the 1755 expulsion of the Acadians. This 29-room home is of New England Colonial style architecture. It has five (5) dormers, and a wide verandah covering the front entry doors.

The Hantsport Railway Station is located at 15 Station Road. The original station was built mid -1890’s with the current building replacing it in 1944. It was recognized as a Provincial Heritage Property in 1995, as a reminder of Nova Scotia’s railway history. The Station is also recognized by the Federal Government as a Designated Heritage Railway Station.

The Kempt Shore Presbyterian Church was built in 1865 and is located on Highway 215 in Kempt Shore. The church was erected for the congregation of the Presbyterian Church of Scotland. It closed in 1967 for regular services however is still used for weddings and funerals. It is a simple wood frame construction with wood shingles and a steep shingled steeple. It has Gothic Revival windows, and a cemetery surrounds the church. The building, cemetery and land are included in the municipal designation.

The Sainte-Famille Cemetery in Falmouth was designated a Provincial heritage property in September 2017, and a Municipal heritage property in April 2019. The cemetery of approximately 300 graves was uncovered during an archaeological dig in 1996 by the Nova Scotia Museum. The cemetery was used from 1698 until the expulsion of the Acadians in 1755 and is one of the only pre-deportation Acadian cemeteries in Nova Scotia. 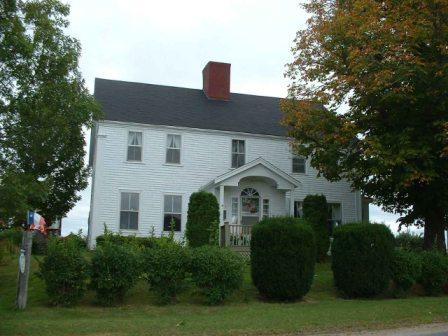 The Sangster Inn, located in Falmouth, was recognized as having Provincial heritage significance in 1991. The house was used as accommodations for people travelling between Halifax and Annapolis Royal. In 1802, the Sangster Bridge was the first bridge built over the Avon River, making the Sangster Inn a prominent destination on the route. The Inn has particular character-defining elements which support a late 18th century date of construction.

Originally known as the Five Mile Plains School, the Windsor Plains Community Hall is located at the intersection of Pellow Road and Highway 1 in Three Mile Plains. The original date of construction is unknown, however the building was used as a segregated school for black children until 1963. This is one of the last one (1) room segregated school houses remaining in Nova Scotia. It is currently owned by the West Hants African Advisory Association and used as a community hall. It is designated at both the Provincial and Municipal level.